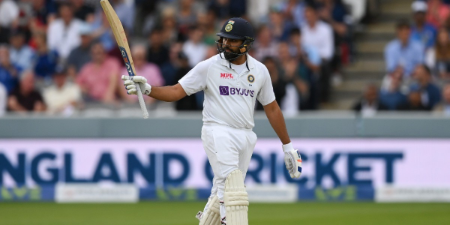 James Clear’s International Best Seller ‘Atomic Habits’ delved deep into the human psychology of improving constantly if something is taken with genuine curiosity. One of the ideas that Clear wanted to propagate goes something like this - “Habits are the compound interest of self-improvement”.

Only Rohit Sharma can tell if he was reading Clear’s theories during his 14-day Quarantine in Sydney last December but there is every chance that many motivational speakers are already charting his journey in the last year to prove their own theories about success, persistence, and resilience. Since his first overseas innings as a Test opener in Melbourne, Rohit has veered two spectrums of Test match batting - at one moment in complete control and then a compulsive pull to throw away his wicket - but never lacked the promise to go big.

The moment Rohit was dismissed on 36 in the first innings of the Nottingham Test last week, there was genuine frustration from the Indian cricket fans. For that innings provided a sneak-peak to a potential big score, but all it took was a misjudged pull to bring the tyranny down. Fast forward to Lord’s four days later, the Mumbaikar turned one of the most difficult propositions to a percentage option in order to score his first half-century in England. His 83 was the ultimate reward for his perseverance.

Even though his runs came at a good strike rate of 57.24, there was a conscious method to his process. In the first couple of overs from James Anderson, Indian openers left alone 8 out of 12 balls. But Anderson decided to make them play at every ball in his third over. A tentative Rohit would have been caught in the trap like he was against Lungi Ngidi in South Africa in 2018 or in the 2014 Southampton Test. However, a clearer understanding of his own approach and by extension, the bowling plans of the opposition allowed him to hang in there. To put that into perspective, since August 2018, while playing in England, 37% of openers have lost their wicket in the first 20 balls they faced but Rohit has already played 286 balls in two completed innings this series.

playing
Newsletter
Sign up to newsletter and stay in touch.
Wait...
back to top
Filters
My account